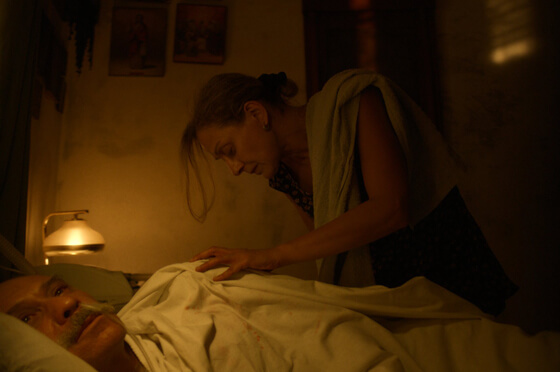 PLOT: Greece, 2017. The lack of financial support of Aris (who suffers from Amyotrophic Lateral Sclerosis / ALS) urges his wife Persephone to get confronted with human existential limits. “How many years does it really take to finally reach «home»?”

WHY 1 : 1 ?
The first idea came though some visual references that Iakovos brought on the table through his 2-years research in houses of actual patients (ALS). We quickly realised that choosing such a ratio could serve the story on an unimaginable level…
…The film needed to feel claustrophobic as the characters are trapped inside a world ready to collapse. A contracted universe. Choosing a wider aspect ratio would not help us achieve our visual story telling goals and wouldn’t have served the story as greatly as the 1:1…

Getting to 1 : 1 through anamorphic
I felt the need to include as much information as possible in each frame, yet preserving the square aspect ratio.
As each scene was a single shot, we needed to capture nothing less than what the story required so, cropping (left and right) was not an option, especially on a tight location. We had to get to 1:1 without loosing any horizontal pixel of the sensor. The canvas needed to get enlarged vertically rather than get shrinked horizontally.
And that’s where the idea of using anamorphic lenses crossed my mind.

Next step -> Camera Tests!
Right from the very first camera test we realized that the idea was working perfectly giving us, at the same time, some interesting artifacts coming from the unusual use of the anamorphic lenses.

During the next sessions at Arctos Films S.A. we determined the look (choosing the Cooke Anamorphic/i lenses), the cinematography process while, with the great help of 1st A/C Vagelis Tzifakis and programmer Dimitris Makrygiannis, trying our best to overcome technical challenges, the biggest of which being live monitoring on set (as there is no ordinary camera or monitor function for vertical desqueeze). Just a few days prior to the beginning of the principal photography Dimitris managed to finish up our final software by keeping the delay to it’s minimum!