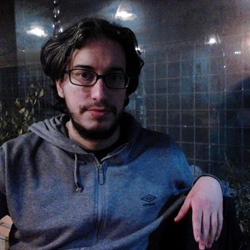 -Drosos, Yorgos, "The Maker as Monster: Portrayals of scientists in horror films, from James Whale’s Frankenstein to George A. Romero’s Day of the Dead". Paper presented at Quite Frankly: It's A Monster Conference, Perth, 17-19 October 2018.

"In praise of the Dionysian: On Giorgos Panousopoulos’s Mania", Filmicon Journal of Greek Studies.

-Instructor of the course "Location-based Storytelling" during the 1st Summer School on Hybrid Arts, organized by the Department of Audio and Visual Arts of he Ionian University, Corfu, June 2017.

-Member of the Research Team on matters of Art and Science of the InArts Lab of the Ionian University.

Supervisor of the Mesopotamia Film Society in Moschato, Athens, May 2015-January 2020

Aspects of The Monstrous in 21st century Audiovisual Fiction

My research focuses on films and television and web series from 2001 to 2015 that specialize in the zombie genre. Apart from a semiotic analysis of the material, my work will draw on bibliography that pertains to philosophy and anthropology, on fieldwork (in film screenings) and interviews with people that watch horror films and series and on an overview of the news stories from the period in hand. The research sets out to detect the possible causes for the shift of interest towards the zombie genre and, at the same time, the changes in our perception of zombies and by extension, the grotesque in audiovisual fiction through the decades (from 1932 to the present day, when, apart from film, there are also TV and web series). How can the depiction of the monstrous be used as a projection or a symbolism of what we perceive as the repulsive Other? How does the mpnstrous itself change? How do the criteria by which something is defined as a monster? How do the conditions under which something transforms into a monster and how are these changes described in screenplays along the years? Are these conditions always associated to human activity or do they at times pertain to the supernatural or metaphysical? And, finally, how does the stance of "simple people" towards people and situations that they rightly or wrongly conceive as monstrous change along the years."