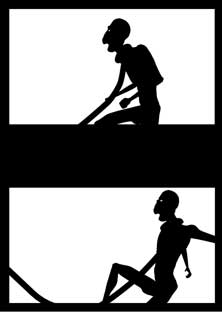 Within the framework of the Interactive Arts Lab the Ph.D candidate Giorgos Nikopoulos will present a series of Seminars entitled “Elements of Acting in Animation”, which will be focused on rhythmic motion analogy and dramatic action.

i) Basic rhythm
To animate a character, we must compose his actions starting from a point of complete stillness. Breathing, moving and speech are some of the sections that should be composed through a signified way, since they are things that are practised everyday by real people and can define the digital character. Practising basic rhythm is the starting point of analysing movements and by extension, the feelings. By learning the way to observe and analyse movements we obtain the knowledge of composing a movement and applying it on the character we are about to animate.

ii) Dramatic action
Dramatic Action is the method used to move in an experienced way through a series of rhythmic activities to the performance via movements and feelings. After this, there will be an effort to compose a small story and direct it in such way that it can be applied to digital characters. The sector of speech, which also belongs in the field of dramatic action, will be approached at a different stage, so first the notion of rhythm and its analysis are perfectly understood.